With food in our stomachs and the jungle nightmares behind us we set about our next move. Our aim was to buy a boat and utilise the huge rivers of Western Kalimantan, the Sungai Melawi and the Sungai Kapuas that flow down to Pontianak and out to the South China Sea.

We set about the normal routine, Ant went running around talking to the locals with maps and bits of paper to scribble on hanging out of his pockets, while I sat with the kit and my ginger beard entertained the local children.

Ant got the message across and soon enough a man came over eager to show us his boat – that was for sale. His name was Minoo, he was a small chap missing a few teeth and reminded me of Rafiki from the Lion King. His boat was bigger than we had planned on buying. It was about 18 feet, made from heavy wood and had a tin roof running from the aft end all the way up until about 5 feet from the bow. It was clear she was old, but the leaks in her hull looked manageable and she looked strong in the water. Initially we dismissed her and said it was too big. Looking at what else was around and after about half an hour to mull it over, we decided that with a boat of this size we could stock up on food and water and live on board. We could be moving west on the river 24/7 and therefore cover far more ground than we had planned. Mr Minoo drove a had bargain but we came to an agreement. We were for the first time in our lives boat owners and we would name her Misrandi after our legendary Dayak guide from East Kalimantan. 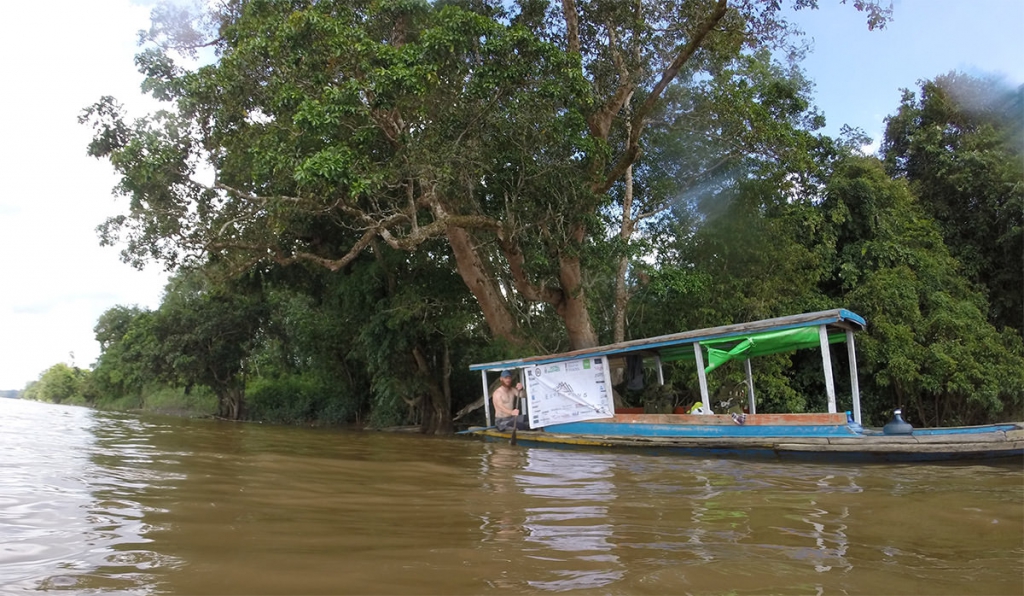 We stocked up with about 20 litres of water, a few melons and pineapples, more instant noodles than you could shake a stick at and of course some hot wets (sachets of coffee). We set off and headed down the Sungai Melawi. Soon after setting of out it became clear that Misrandi only required one of us at the back paddling and maintaining a correct heading, this would keep us moving at a surprisingly fast pace. We started a routine – one hour at the helm and one resting in the day and two on two off at night. Ant took the first shift, I sorted some kit out and then went and sat at the bow, for the first time on the expedition we were moving in the right direction without having to sacrifice the soles of our feet or the muscles in our back and we were able to enjoy the view. We were (for once) winning and moral was high.

All was going well and we had Sintang in our sights until one evening at around 2000 a mammoth wind came from the west, we had heard this wind before in the jungle – a storm was afoot. Sure enough within 10 minutes it hit, the rain crashed down and bolts of fork lightning lit up the sky as they hit the river and forest around us. We struggled with the paddle as we got blown all over the place and Ant tried to keep up with the rain filling the boat, frantically bailing it out. After a extremely tiring (and quite scary hour) the storm dulled into steady rainfall. The rest of the night was miserable, sat in wet cloths waiting for the morning sun. Now we were out of the jungle and on board our luxury live-aboard there was no need to be sitting, cold in wet clothes. Next time the storm came I would get completely naked and take the helm, keeping my clothes dry and out of the rain. When the storm had passed I could dry out and put my clothes back on. Ant followed suit and from then on any lucky on lookers could occasionally see two naked bootnecks paddling down the largest island river in the world, silhouetted only by flashes of lighting.

By the time we were approaching Sintang, Misrandi needed some running repairs and more supplies. We decided to go ashore. In Kalimantan, many houses have their toilet afloat on the river at the bottom of their garden, much like in England houses used to have the toilet at the end of the garden. As we were paddling a fairly large vessel, with little experience on the water and in a reasonably fast flowing river we decided as we got close to the city centre to aim for someone’s floating toilet and hope that they would welcome us, show us the way into town and help us make some repairs. So we did just that and no sooner had Misrandi’s hull hit a little floating tin hut toilet and little man in a sarong come running down from his house that stood on stilts about 20 meters away. He had a big smile on his face, we explained our situation the best we could and off he went back to his house, a few seconds later he returned with a hammer, saw, a tub of rubber gum to fill any holes and some new rope. Not only did he help us repair our storm damaged boat but he also invited us in for lunch with his wife and son – what a legend. We popped to the shop, re-supplied and said our good byes to yet another incredibly generous and friendly man from Kalimantan.

Now on the huge Sungai Kapuas we had to stay out of the way of giant barges and tugs that were pulling tons of coal and other materials up and down the river. We maintained a good pace day and night, stopping very briefly to pick up supplies. Sticking to our routine religiously meant it was not long until Tayan and our final stop was in sight, from here we would yomp the remaining 120Km to Pontianak.

We tied up Misrandi for the last time, now filling up with water far quicker than when we bought her so was not looking her best – in fact the sad truth was that we couldn’t even give our beloved boat away!

About the Author: admin