Can a blog have an epilogue? I doubt it, but when have we ever paid attention to convention?

Right apologies once again for the delay in this one boys and girls…due to all our hold ups we both pretty much landed in blighty and were straight back in the deep end with our respective jobs…anyway the epilogue/conclusion to our final journey across Baffin Island. Hope you all enjoy.

After our near suicidal trip to the coast, we made it back to the cabin and had 18 hours of making the most of being warm and in our sleeping bags. We celebrated by belt feeding hot wets (nonstop drinking of tea and coffee) and smashing out Billy Joel and Tupac on our speaker. 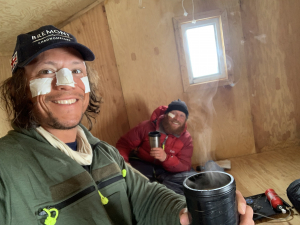 At midday the next day, the collection we had arranged through Ted Irniq (the outfitter who dropped us at the west coast) arrived. Two Pangnirtung locals Joe and Daviday who delighted in hearing our story and filling us in on all the news we had missed since starting our journey.

“Did you guys hear that Elon Musk bought Twitter?”

Ah. Back to reality.

Our four-hour skidoo ride took us over the sea ice where small open water leads were beginning to fracture the thick white surface. 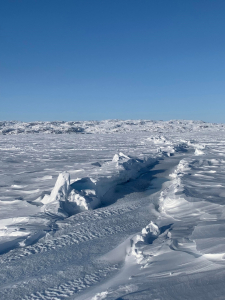 “You guys are lucky! Another few days of warm weather and you would have been stuck out there”

Lucky is one word you could call it I suppose.

Finally, we reached Pangnirtung, a small Inuit community of about 2000 located within an awe-inspiring location at the base of the Akshayuk pass.

1800m peaks rise from sea level all around the hamlet that sits next to a frozen fjord. As remote as it is beautiful the settlement, like many the Inuit settlements in the north are totally reliant on the daily planes that ferry in supplies, fuel, and people.

Checking into the local guesthouse (essentially a hostel that charges 350$ a night to stay in) we got to sorting all our gear and preparing for the flight back to Iqaluit and on to Ottawa and the UK the next day. Job done right?

Now really? What have we learned?

Yep. It was never going to be as simple as that. Only one airline operates in northern Canada, and according to many of the locals we spoke with; as they have a total monopoly on the flight services in and out, they are grossly overpriced and mismanaged. We paid lip service to the warnings, however by our third day of missed flights we were starting to get tetchy. Finally, a flight made it into the settlement which we had tickets for, however Canadian North are allowed to remove passengers from flights if they have other passengers with medical or cultural reasons to travel. So, as we were about to board our flight we were regretfully informed we had been moved from this flight in favour of a kids hockey team that one of the airport staff’s children played for (we’re not bitter at all).

As if that was a perfectly valid excuse for leaving us stranded with no accommodation arrangements in a settlement where we knew nobody. Lessons learned for sure, if it had gone on any longer our tent would have been set up on the runway.

After one cancelled flight we were approached by a local who informed us they were taking a trip to Iqaluit over the Cumberland Sound and had a spare snowmobile as they were taking it to sell so we could jump on the trip that evening if we wanted to. We grabbed our sledges and waited for our newfound friend to arrive at the guesthouse that evening but he never came back.

“Life in the north buddy”

After phoning Ted back in Iqaluit the next day who spoke with his friends out of Pang, we found out another group had just had to be rescued from the Cumberland Sound due to the now rapidly deteriorating sea ice conditions. He advised us in no uncertain terms not to even consider it. Bullet dodged. 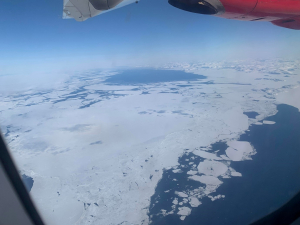 Eventually after 7 days, 8 cancellations, being bumped for a hockey team (I promise we’re not bitter!) 2 cancelled charters, and a near miss with the Cumberland Sound, we managed to board a plane back to Iqaluit where we met Ted and his wife Sonia and spent the evening telling tales of our crazy few weeks with them. With our flight to London via Ottawa and Toronto booked the next day we settled relieved that our Groundhog Day of missed flights due to an incompetent and ineffective airline we’re almost over.

But what have we learned?

Yep. As soon as we reached the airport the following day, we were regretfully informed by Canadian North our flights to Ottawa had been delayed due to staffing issues we would miss our connections. 13 hours of travel was to be turned into 35 hours of travel with the replacement service they offered.

Apologies for the huge diatribe but if we were getting paid, or if it wasn’t after such a long and gruelling trip, I doubt these multiple inconveniences would have even made an impact. However, as it is, we hadn’t seen our loved ones in considerable time, and both have jobs to go back to so there is a cut-off that we can cope with the amount time we spend wishing our lives away in Groundhog Day.

After travelling around the world, through several third world countries and extremely remote communities. Whilst using all manner of budget airlines, we can without any doubt whatsoever say that Canadian North is head and shoulders above the competition when it comes to being the worst airline we have ever travelled with. Rant over!

So, as we land in Toronto (yep, we’re still travelling! (we’re not anymore but I wrote this a while ago)) to await our final flight to the promised land this time I really am signing off for good, hopefully there will be no more chapters to this journey at least.

Baffin Island tested us beyond anything we ever thought possible. It is a beautiful but hard environment that shapes its people.

Men like Ted Irniq and the communities that thrive in place that most westerners could not last a day in. Witnessing the Inuit culture and seeing how the people thrive in such a place where we truly struggled has been a special experience that we will treasure forever.

Finally, (I promise that’s it) we have some ‘thank-yous’ to make. To list everyone that has helped us achieve this goal will take a lifetime so if I miss you out, I apologise immensely.

Firstly, we owe a huge debt of gratitude to Bremont for stepping in at the eleventh hour and becoming headline sponsors for this endeavour. As I’m sure you can imagine after reading this blog, anything done in Arctic regions is not cheap. After being let down by several sponsors pledges, Bremont stepped up and enabled us to be able to finish this crazy adventure in style and safely.

Next thanks goes to Brigantes and Trekitt Mountain Sports . Two outdoor retail giants that ensured we had the right gear we needed throughout. From pulks to expedition suits, these guys covered every base possible. They are also both managed by extremely knowledgeable and extremely helpful humans who have become our close friends over the years this endeavour has taken.

Anyone needing any outdoor equipment or advise should do themselves a favour and look these companies up before they go anywhere else. In addition to these legends, we have so many sponsor we could and should shout out but for now a special thank-you to Firepot Food who ensured we had some decent food to look forward to each evening and fuel our carcasses along the way. Eastview Geospatial, one of our first ever sponsors and who have provided us with as accurate mapping as exists for each and every one of our journeys. To Acapulka who broke convention by sponsoring us with some extremely high-quality sledges through the legends that are Brigantes. And finally, to Asnes Skis who provided us with the world’s best in cross country skis in order to finish our journey. 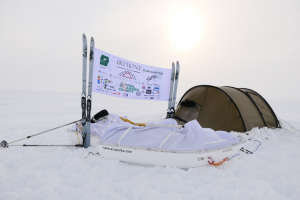 The flag of legends

Next a huge shout out goes to the legendary Paralympic hero that is Steve Arnold. From day one he has managed tracking us in conjunction with Gridsmart ltd and has in the past had the unenviable task of informing our families that we were unreachable for a week as we were battling our way through the remote Bornean jungle. As well as this he has managed our social media feeds and all the admin that came with running our mission control. We owe him more than a few beers when we are home(now).

Following on from that a big thankyou to Kieron Brogan has been managing/ updating our website since day one and also to the beautiful, wonderful queen that is Rheanna Egleton (whom I owe multiple thankyou and apology meals now) who took over the running of the website for this expedition. She has been ensuring all my 20 words at a time jumbled messages were turned into legible blogs for you all to read.

Penultimately a massive qujanaq (Inuktitut for thanks) goes to our now good friend Ted Irniq. Not only for housing and transporting us in Baffin, but for giving us extremely valuable advise and local knowledge that ultimately saved our expedition from utter catastrophe. If anyone out there is planning an expedition to Baffin Island, there is no further you should look than Ted’s company Tikippugut when looking for a local outfitter.

And finally (yep this is it!) a colossal Terimah kasih/tenkyu/misaotra/ and Qujanaq to all of you. Without an audience to tell our tales of mad misadventures to this whole evolution would have been pointless and we have loved sharing every debacle we have faced with you all.

This is Ant and Louis, The Mad Explorers, signing off for now.

It’s been a hell of a fucking ride.

Life in the north buddy