Descending the Plateau de Makira, we had made our way into the dry desolate hinterlands of Madagascar. The next morning after we arrived at The Friends of Mandritsara compound, I awoke early to begin preparing for our onward journey into the desert like interior only to hear Louis being violently sick in the bathroom next door. The previous day we had been given food in a remote village, with the bowls of rice they gave us it is customary out here to drink the water used to boil the rice, not great but usually safe to drink, unfortunately for Lou they had watered it down to cool it with river water.

He was bed ridden for 24hours meant I had make up for lost calories for us both, which I must say I excelled at. It also gave me the opportunity to be shown around the hospital by one of our hosts Nathan. Mandritsara is an extremely remote location within Madagascar, and many locals walk for hundreds of kilometres when they are in need of medical care that doesn’t involve packing a wound with cow dung or having a witch doctor jump on their stomach (Seriously!) It was a truly humbling experience to see the real hardships endured by the patients, and really put a lot into perspective for what we take for granted in the UK. Due to malnutrition, and a high rate of teenage pregnancies, many complications are experienced during childbirth. I met one such young lady who had travelled for days on the back of an ox and cart during labour. Her baby was still born and she was in a severely bad way, the procedure used by the surgeons in such situations is one that sent a shiver down my spine, but one that is used with alarming frequency due to the remote impoverished nature of the country. It was an experience that will live with me, and one that makes me grateful I was lucky enough to be born in a first world country.

The staff of the hospital are all Christian doctors and nurses with a large number from the UK. The gentleman who helped arrange our stay had been out in Madagascar for 9 years with his wife and 3 children, the youngest of which; Ben being born in the hospital. They treated us with true kindness and generosity, and we felt like one of the family during our time there. Ahead of us stood the parched interior; during our planning we realised that the distance between settlements and rivers meant we would need to carry a LOT of water in order to survive the trip towards the west coast, more then we would be able to physically carry on our backs. To that end , whilst we were in the UK we had sent out some trailers to the Linleys, which once Louis was better we got to adapting so we could clip them to our backpacks and load all or kit and supplies to drag behind us. 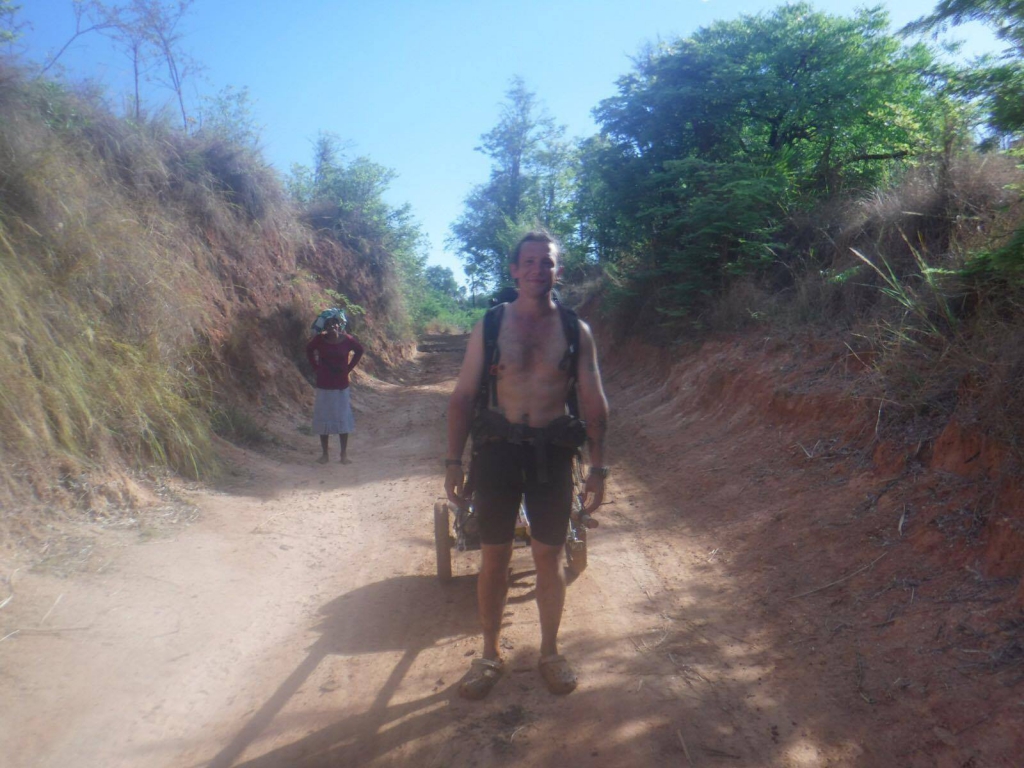 We were dreading the outcome, we had no idea what the desert tracks would be like, and whether or not the trailers would be remotely usable. We were given a huge breakfast and stocked up with food by the legends at Mandritsara and we set off westwards into the dusty Malagasy heartlands. Our decision to put faith in the trailers paid off, and for once we were covering ground without our shoulders and backs screaming at us. Dry, arid plains awash with scrubby vegetation stretched out for endless miles ahead of us, the African sun beating down on us with incessant relentlessness. The settlements we walked through were full of staring children, stomachs bloated from malnutrition their fearful eyes watching the first white men they had ever seen walk through their village dragging a trailer stocked with goodies in our wake, what a site we must of been.

More then once I questioned our motivations behind travelling through such an impoverished area laden with gear that probably had more worth then most the villagers entire possessions. It was an awkward and embarrassing thought and one that had me feeling more like a tourist then I ever have done before. We witnessed but a fleeting glance of the actual hardships of the people out here who for the most part are incredibly cheerful and determined, once again the struggles we face in the west were put into clarifying perspective. 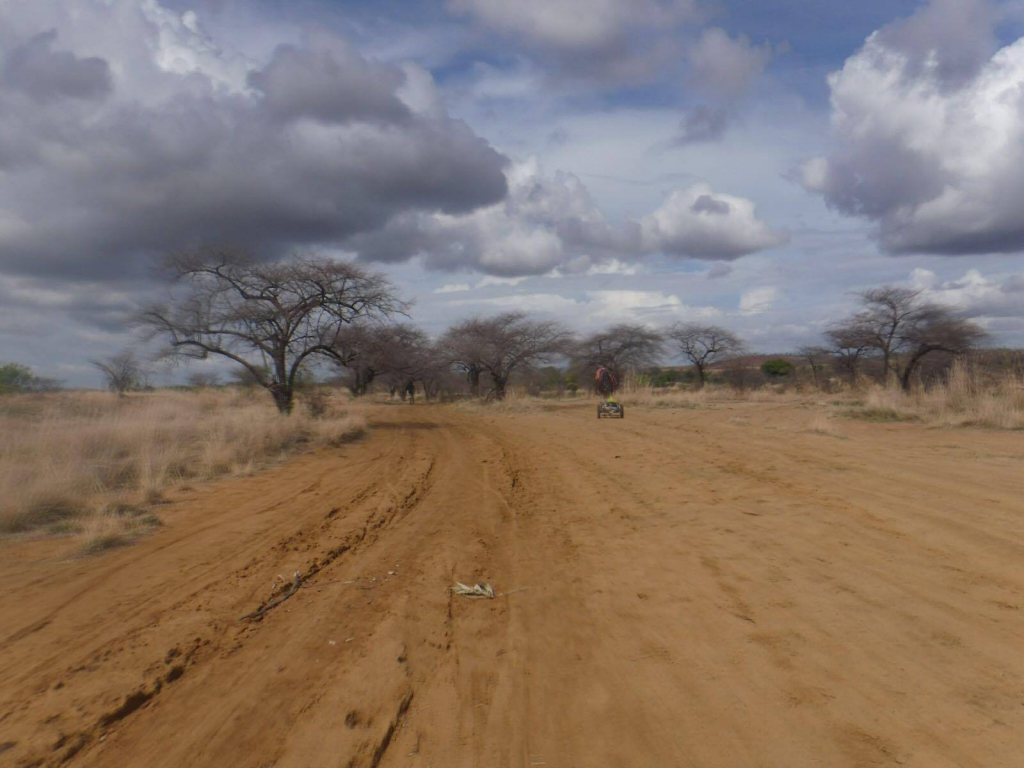 We were entering the rainy season, but the rains had yet to arrive. Usually a good thing for a bootneck, but bad news for us as what was left of the rivers we were relying on to refill our water was little more then stagnant puddles being shared by locals and zebu (cows) alike. Our first evening with the trailers we spent hours filtering then boiling the only liquid we could come across. It looked bleak for what was to come and we soon realised we would need to start covering serious distance each day to ensure we would be able to safely resupply our water.

Over the following days dehydration became a constant companion, our bodies screaming at us to rest as we covered ever increasing distances to reach any source of water. I write this now unwashed for 4 days, stinking of mud, sweat and biltong, only 3 litres left between us with still over a 100km to get across the desert. We have set up camp in a small mango grove, and are sucking as much moisture as we can from the fruits that thankfully are in season right now. Living of a handful of biltong, copious mangos and a few packs of noodles each day along with the lack of water and the vast distances we are covering is beginning to wear away at our bodies. Though as I sit staring at our campfire high atop the blood red plains looking up at a sky night that twinkles majestically I can’t help but be in awe of this harsh majestic land. 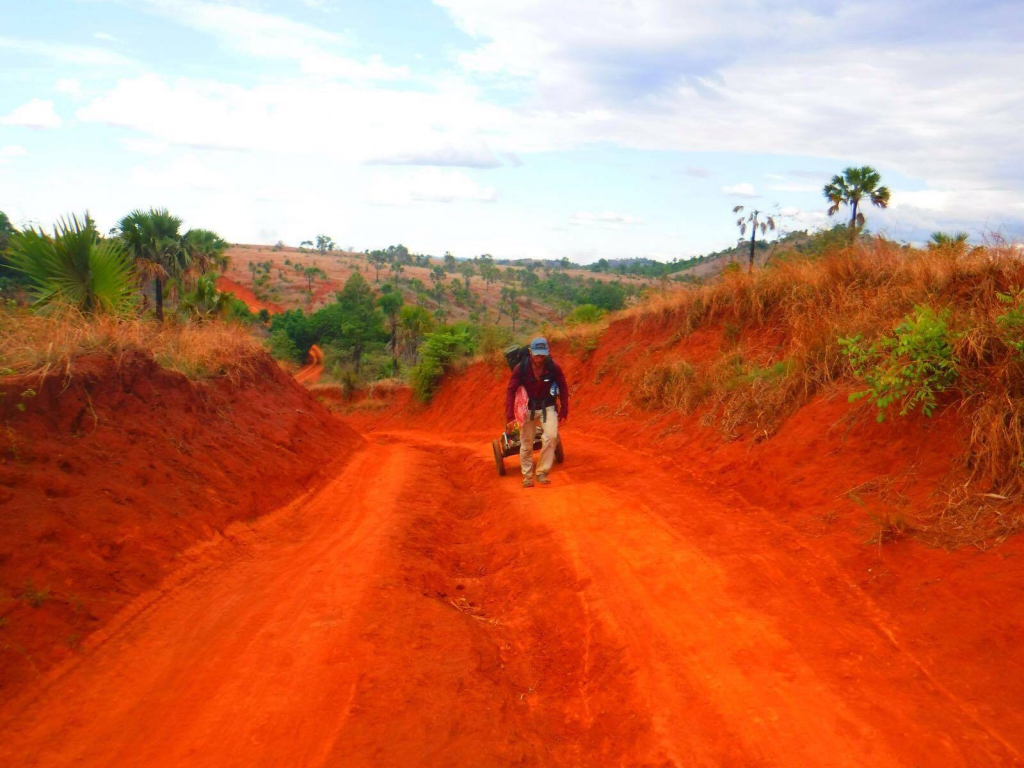 You all know by now the underlying reasons for why we are embarked on this journey and why our kidneys have been in overdrive for the past few days. We are pushing our bodies to their limits daily, and though it is an amazing adventure, it is not something we do lightly. In raising money for The Royal Marines Charity and Help for Heroes, we are raising funds for the men and women who put serving our country and protecting the values we cherish above their own personal well being. The charities do make a difference and it is something that makes dragging a 50kg trailer through the parched inferno like sands of Madagascar all the more worthwhile. If your inspired, bewildered or simply just feel sorry for us, click on the link below and “Chuck us a Fiver