A Message From the Wild

A Message From the Wild 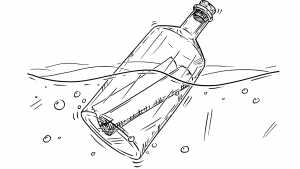 Ant and Louis are regularly contacting the team back at home via satellite phone.This blog was sent back to England, 20 words at a time by Ant. You can’t question their dedication!

Picture if you will a coffin. Maybe a pine one like the ones of the old westerns, or perhaps it’s a regal one fit for a king made of the finest royal English Oak. For the purpose of this exercise, the coffin material or who it is made for is not important.

What is important, however, is that you can picture what a coffin looks like, and that you have a brief appreciation of the laws of aerodynamics. What I’d like you to do with the coffin that you hold in your mind’s eye is enlarge it 5-fold, place to toboggan style runners on the bottom, and fill it with an eclectic medley of the hardest materials you can get your hands on, maybe a Coleman’s stove or perhaps a few saucepans? Why not throw in 140 freeze-dried vacuum-packed meals as well.

From this coffin sledge we will now place the hapless protagonists of our tale of woe.

For those of you who have never experienced the joys of riding in a kamutik over ice, rocks, and frozen snow, I can assure you it is one of the finest of cultural experiences I have ever experienced. If you have ever been shot from a cannon into a brick wall, or hit repeatedly in the sternum with a sledgehammer, then you will have a brief appreciation of what a kamutik ride is like.

Despite travelling the world using various forms of transportation, I can honestly say that it is the single worst way to travel. After 500Km and three days of being battered by the frozen north, our moaning came to an end as we reached the west coast of the Great Plains of the Koukdjuak with our outfitter Ted and his two friends Eric and Kevin. Other than the ride itself, the experience of spending this time with Ted and his pals in their home environment has been amazing. Some of the stories we have heard have been out of this world, and the friendliness and hospitality shown to us has been second to none. We are looking forward to seeing them again when all this is over.

Before departing Ted and Kevin even took the time to show Louis and I how to properly construct an igloo, should we get caught out in the shit.

After we had been left alone in the snow, we spent our first two days skiing over the incredibly flat Koukdjuak plains with aims to meet the river further up.However due to the reports of open water we have heard about where Nettling Lake meets the Isortoq river (our intended route) we have opted to cut north.

This has been a very mixed bag with us encountering very soft snow on rolling hills that seem never ending. Add to that our 100kg pulks, whiteout conditions and temps in the minus 20s with wind, things are beginning to get quite difficult.

I will try and update again in a few days but if you enjoy following our tales of woe and misadventure, we would both truly appreciate it if you could “Chuck us a fiver” to the Royal Marines Charity where all funds go to the mental health initiatives for veterans in the charity.