We arrived in Madang, a small bush airport on the north coast of Papua New Guinea (PNG). We were greeted by a tall man and his wife. Jude was his name, a Doctor here in Madang, his wife was called Ann. They drove us back to their home on the outskirts on the main town. As we drove through town, hundreds of people were just hanging around the streets not doing much, staring at our white faces whenever they noticed. Initially we felt quite intimated remembering all the horror stories we had read about the violence in PNG prior to our trip. Jude shouted and waved to many friends on the way and Ann asked us questions about our travels and families in her soft kind voice.

We arrived at their home, a simple house surrounded by a well-kept tropical garden. We were introduced to Terry Ann’s brother and their three children. Ann offered us a cup of tea and some lunch. Over lunch Ant asked Jude what was the matter with Terry’s arm as it was in a sling. Jude said he was recovering from a machete wound to his neck and a result of fighting with another lad from the next settlement.  We looked at each other not needing to say a word as we knew exactly what the other was thinking.

Jude and Ann showed us great kindness and offered us advise about traveling around this very complex and diverse country. We left them to start our journey to cross this giant unexplored island feeling well rested and great full for their hospitality. 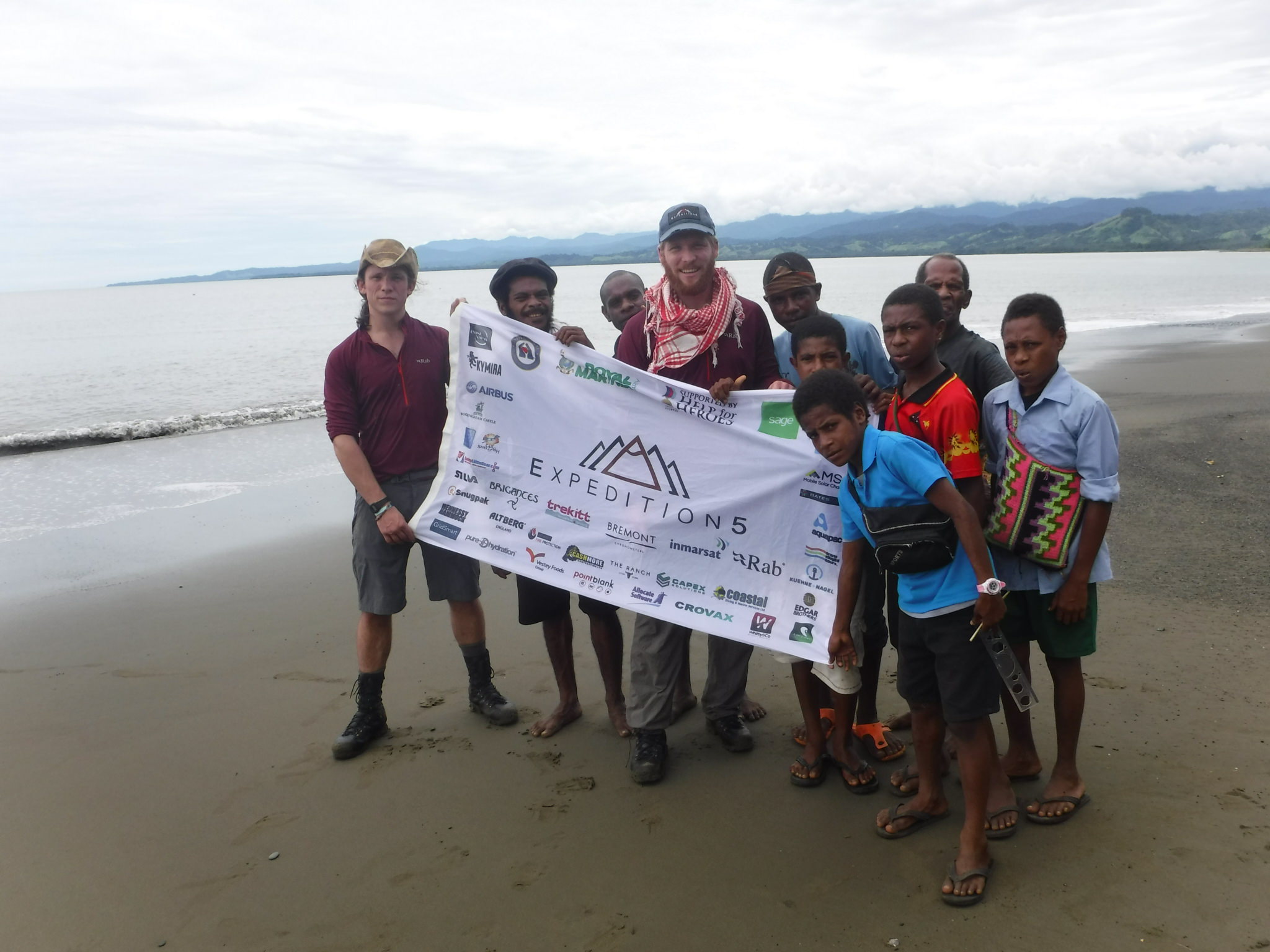 So, after an ominous few days spent secured in our safehouse in Madang, we finally got our journey underway. Collected from Jude’s house by what can only be described as a posse of lads, we headed 25km south to the settlement of Bugajim. As we left Madang, gangs of youths chewing beetlenut (the local stimulant of choice which reddens the tongue and teeth) watched us, bright red teeth and wired eyes stared at the unusual sight of two fish out of water. Despite how intimidating the faces looking at us were, we smiled and waved to which we would be met with crimson smiles and friendly greetings.

The overpopulated squalor of Madang was soon replaced by traditional houses made of bamboo and sago, we were now entering the raw and simple beauty of rural PNG. Cutting off the highway onto a minor track, we were faced with a swollen and fast flowing river, and cracked our first (of what looks to be many) river crossing of our journey. Lush verdant jungle, broken by small cocoa plantations and village gardens lined our route. After a while a spectacular clearing complete with a number of traditional houses and spectacularly vibrant plants indicated we had reached the settlement of Bogjim. The head teacher of the local primary school greeted us along with a village elder, they set to showing us around. Bogajim was one of the first settlements to be “converted” when the waves of missionaries arrived in the late 19th century. A huge memorial which once was complete with a bronze eagle (that had long since been looted) commemorated the German colonist, Curt Von Hagen, who had settled in the village over 100 years ago.

The village supported itself by a mix of subsistence agriculture and small cocoa plantations, next to the beach a makeshift smoking house prepared the beans so the locals could sell them in Madang. Accompanied by a giant group of locals, we reached the smooth white sands of the beach and took the photos, complete with flag, that would mark the beginning of our New Guinea traverse. The lush palm lined shore, gentle lapping turquoise waves and crystal clear water was certainly a marked difference from the beginning of our Kalimantan traverse out of the heavily polluted, industrial port on the Makham delta.

A bubbly, short lady teacher greeted us on our return into the village, her name was Mrs Banag and was mother to one of the lads we had walked into Bogajim with. Despite the sun beating down on us, without a cloud in the sky she told us the weather was far too bad for us to continue today, and we would have to stay with her. Bemused, but not wanting to upset the locals who we hugely rely on to complete our journey, we agreed. What then followed was a spectacularly surreal set of affairs. On asking whether we could get some photos with the school children. Mrs Banag pulled a megaphone from god only knows where and proceeded to organise the school into year groups and order each to stand for a formal photo with the Mad Explorers.

After the photo factory line, we were then requested to give an assembly under the huge mango tree that sat in the corner of the school grounds explaining what we were doing. Hundreds of brown eyes watched us intently as we proceeded to tell them all about Expedition 5, translated into Pidgin by Mrs Banag. Hushed whispers and giggles greeted our request for any questions once we had finished, and we sat shaded by the big green leaves of the tree, like a pair of strange animals in a zoo being watched in an awed silence.

That evening Mrs Banag and her 2 young twins Gordon and Jordan put us to work preparing coconuts for our dinner, she told us many stories as Louis grated the thick white flesh on a specially made stool. Our favourite was the one she told us about the original missionaries that came to Bogajim, only to be killed by the locals who then proceeded to eat their shoes.

After a veritable feast of coconuts, fish and yams we were told that the teachers wanted to ask us some questions about Afghanistan. We were led in darkness to a pitch-black classroom filled with locals, Mrs Banag then told us they wanted to hear our Afghanistan stories.

No one in this remote community owned a TV or radio. Stories out here are as important as Corrie to most people back home, two exotic white men, with tales of war in a far-off land was for these guys like stumbling on a box set of Breaking Bad. For hours we sat, recounting our experiences in Helmand and asked all sorts of weird and wonderful questions as we spoke. A particular favourite was when asked by a tall old man if we had managed to kill Saddam Hussein whilst we were in Afghanistan.

We pitched our hammocks in the primary school that night, the villagers watched in awe and laughed as they exclaimed we looked like the Flying Foxes of Madang as we slept.

The following morning, we were accompanied by Mrs Banag (who had took a morning off school) to the next settlement of JimJam. Despite our previous arrangement with guides (we were supposed to have 2 guys all the way until the other side of the mountains) she roped in some 4 people to accompany us on our journey. The reasons behind this are slightly complex, but has a lot to do with ours and the locals protection, and having people that knew someone in each settlement, in a country of tribal feuds, where getting hacked to bits its relatively commonplace, we broached no arguments at having more lads along with us. The lad leading the group was a young guy called Stanley, 22 years old, extremely lean and very dark for a Papua New Guinean he spoke near perfect English, and was an incredibly articulate young man. Next was Alex Banag (Mrs Banags son), an wisened middle aged guy called Vassile, and the fittest man we have ever met, a huge bloke who looked a spit of 50 Cent by the name of Simon. Simon would sprint ahead scouting the route and hacking his way through the more dense areas before sprinting back. 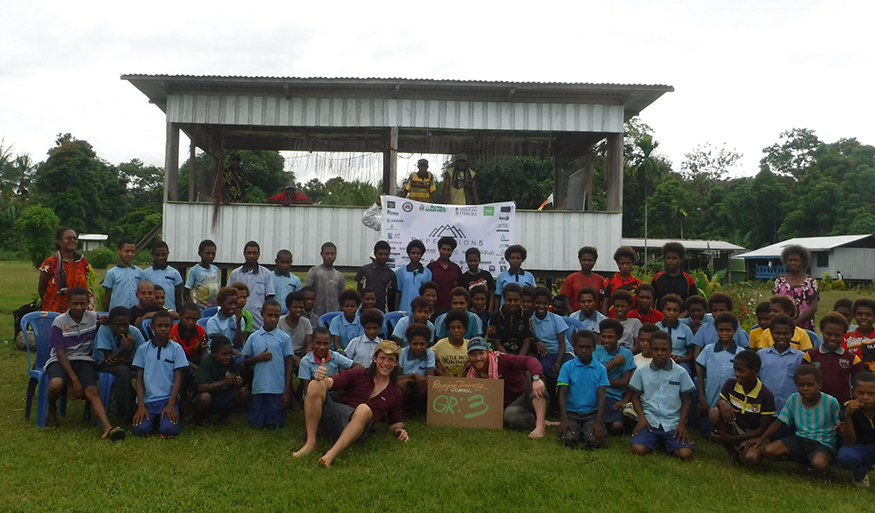 Countless river crossings meant our feet have been continually wet. Hot, humid air has us drenched in sweat, and every few hours we cool off by lying in the fast flowing mindjim to letting the water wash over us before we set off again.

The jungle tracks were extremely narrow, steep, loose mud trails that would give under the combined weight of a white man carrying his life on his back, and we would often end up on our behinds as the tracks gave under our unexpected loads. By the end of the day we reached the settlement of Aseuii, a small village with about 70 locals. Naked children played in the sun, whilst the elders sat under sago leaves around a fire pit telling stories. All the houses were made from bush materials, however the primary school was a solid construction of hardwood and sheet metal, we were greeted by the head teacher a man called Jonah, who told us the locals had pooled their income from selling Cocoa beans and bought and carried all the materials from Madang. We were completely gobsmacked, the route we had done today was treacherous to say the least and the locals had took it upon themselves to make sure their children could have some form of education. With no government support whatsoever this village, along with many other rural communities had taken it to ensure their offspring could have the opportunities denied them, at our amazed faces Stan shouted;

After washing in the river, we were fed a dinner of baked bananas which left us still ravenous, not wanting to be rude we thanked our hosts and slung our hammocks. Stan dismissed all the curious locals who were gathered around us, we had at least 10 hours head down (sleep) ahead of us and where very happy with our first proper days progress. Before we slept Stan approached us and apologetically told us tomorrow we would have to scale a mountain as the river was too “Tight” to follow, saying sorry numerous times he explained we would be faced by many “Little rubber snakes” that would suck our blood. Ah, leeches, our old friends, laughing at his description of them we said not to worry and got to sleep.