We both agreed that a days rest was needed. The previous days 57km yomp had taken its toll on our bodies and some R and R made the prospect of the next leg feel slightly more feasible. 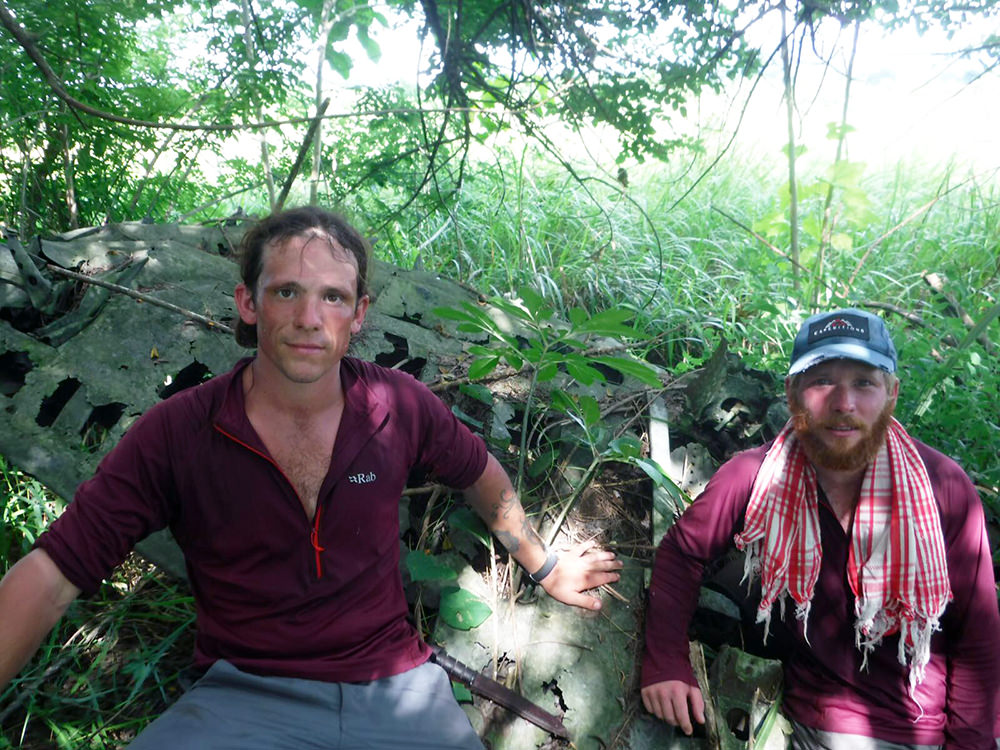 We had a chat to our contact. A short chap with a pot belly called Wikki, he was the assistant manager of the ranch that we were staying on. He agreed a rest was in order (not surprising looking at the state of us) and that he would look after us. After a cup of coffee and some peanut butter sandwiches we got some well deserved sleep.

The next morning, we woke around 05:30 to the relaxing sound of guitar and a woman’s soft voice, it was Sunday and a church service had started under the mango tree close to a river. Ant and I slowly got up and couldn’t help but follow this beautiful harmony. We were welcomed to the service and asked to introduce ourselves and explain what we were doing in this remote part of the world.

Following the service all the children ran off down to the river, shedding their cloths as they went before bomb diving into the deep part of the river, we of course couldn’t resist and spent most of our rest day playing in the river with these little legends.

That evening we started to prep our gear to leave in the morning, as we used our head torches to pack I notice a giant silhouette walk up behind us, followed by a little stumpy bloke (Wikki). He said to us that this huge arrior was the man that would help us get to next settlement his name was Ishmail. Around 6 ft 4 and hands the size of large shovels he smiled as he shook my hand (nearly dislocating my arm at the shoulder) and smiled. Straight away I trusted this bloke and knew he was going to be a asset to our duo.

We left early and it was not long before we were waist deep in mud, we needed to cross the river Markem but getting to the river bank was easier said than done. The river basin stretched over a vast distance. It was incredibly tough going every step requiring a huge amount of effort as the swamp tries to suck the boots off our feet. 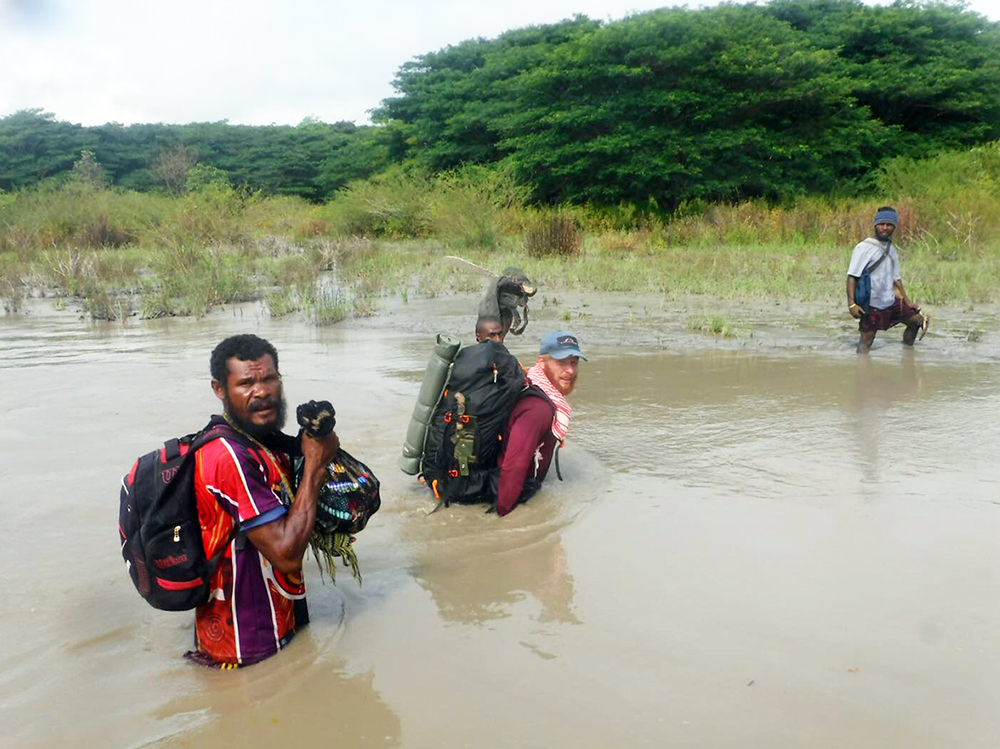 We eventually made it to the bank of the fast flowing river, Ish didn’t seem phased at all and pointed out where we were to cross. We struggled against the flow, being considerably shorter than Ish the water was up to my neck and struggling to get the grip on the river bed to push myself across. After a few hours completely exhausted and 100% saturated with river water we made it to the other side. Ish smiled with a giant grin and said “We did good, very lucky. Many took took (crocodiles) in this river”.

The swamp of doom was just as relentless on the other side, for hours and hours we slogged through, slipping, sliding and regularly falling over. I noticed the sun was starting to fall lower in the sky. Surely we could not be far away, we had been going for over 10 hours. Just was the light faded we walked into Mafanajo. A settlement of around 600 people. We slipped in to the normal routine of telling the village elders our story and having a “wash wash’ in the river.

Just when we were getting in our hammocks a young lad called Jeffery came over and asked if we wanted to see a plane. A little confused I tried to make sense of what he was talking about. “Japanese plane in our village”. He was talking about a world war 2 plane wreck was just a few meters from where we were sleeping and he wanted to show us in the morning. We agreed and got in to our suspended beds, it wasn’t long before Ant was snoring like a wild jungle pig.

As Jeffery hacked through the long kunai grass a dull metallic shape appeared, sure enough it was a small Japanese fighter plane. Riddled with bullet holes, I was shocked to see this piece of history right in front of me. We pondered the situation this chap and how he very likely lost his life in this very spot. I felt honoured to have seen such a rare spectacle.

By 0800 the sun was already blistering and we had to leave our jungle museum in order to make it to our next destination Tisli Tisli as we left the village an elder said to us “don’t worry white man Tisli Tisli not far, maybe 1 hour or 2”.

I thought to myself “brilliant maybe a easy day”. I should have known better, nothing in this country is easy and once again I found myself waist deep in crocodile infested mud swamps, energy sapping and psychologically draining we plodded on for hours with no rest, just when I thought we were out of the woods we started to climb around every corner was a false summit. The mountain was taunting us and my patience was getting thin.

Finally we reached the top and looked down on the most beautiful village surrounded by green velvet mountains. ‘Tisli Tisli’ Ish said and pointed with his huge hand. We had finally made it to our destination and just in time I was spent and had nothing left in the tank.

Tsili Tsili; nestled in the heart of the wild untamed Watut valley. The village was used by the Allied forces during WW2 as a secret staging area for the attack on Lae which the Japanese forces controlled. Given it’s remote and highly inaccessible location, it’s clear to see why the Allies chose this spot. We spent the night in a bush house that belonged to a truly wonderful lady called Josalin who fussed over us both like a worried mother. The following day we spent in the village waiting on a new guide who could lead us on the bush tracks into and over jungle blanketed mountains that awaited us. Ishmael, for some reason had taken a shine to us and despite the fact he was supposed to leave us here, offered to stay with us until we came out of the mountains. We still needed to wait for someone that knew the way, but having the giant form of Ishmael accompanying us did a lot for keeping us at ease. He integrated into the villages well, was extremely likeable, and his mammoth stature was as good as walking with a 6 shooter strapped to our hips for security. 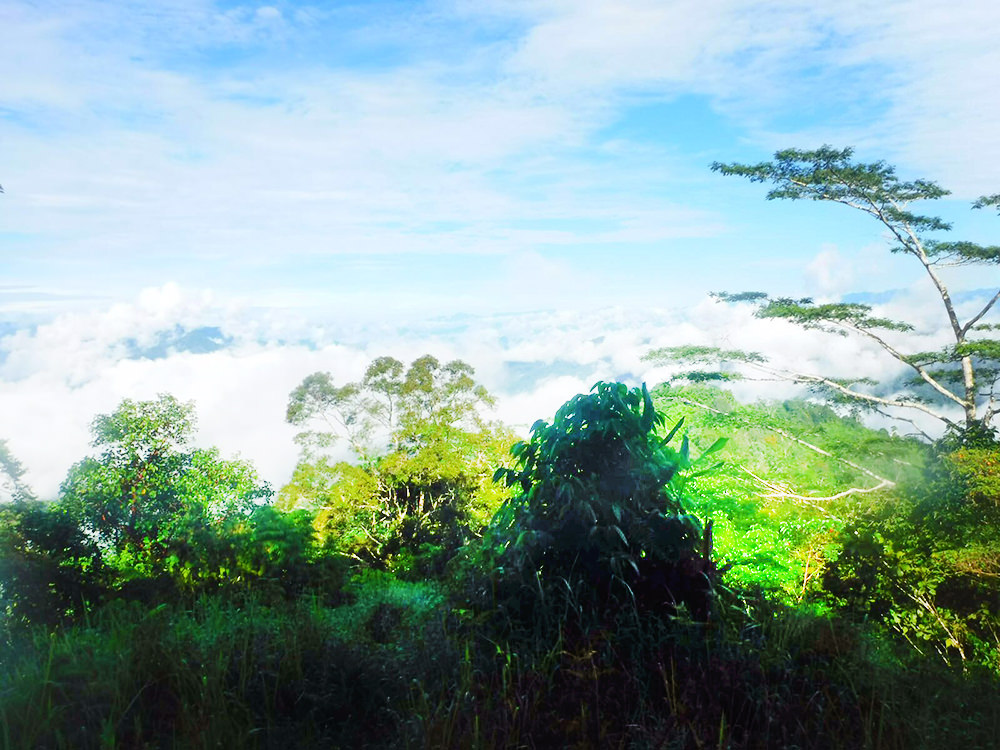 Guide sorted we set out as the sun rose over the spectacular valley. After 3 hours we were faced with crossing the eerily murky waters of the Watut river with its huge crocodile population. Thankfully Ish found us a dugout canoe, conveniently stashed in the surrounding jungle, legend. What followed was an extremely long, emotional climb. We scrambled and clawed our way up the mountain, each step an inferno for the muscles in our long abused legs. After negotiating this first mountain we made our way along through a spectacular gorge with a fast flowing turquoise which we crossed more times than I can remember. Completely saturated, fatigued and sore we left the river and began to climb yet again. As the sun set, we reached the precariously placed village of Zilani, which sits atop a huge mountain over 2500m high. Surrounded by jungle and clouds, this remote slice of civilization is a marvel to behold. Ish got to work securing our accommodation and food, and that night the entire village gathered to hear our “Stories”. They love a good ‘dit’ out here.

The following day we left as the sun arose from it’s slumber. We followed the tree clad ridgeline every now and then a clearing would provide views of the magnificent vista surrounding us. Despite the pain and heat  we both felt truly honoured to be probably the first outsiders to walk these bush tracks. As we approached our decent, the heavens opened. Biblically.

The downpour was a complete washout, and the mud tracks we walked along were replaced by fast flowing streams that raced downhill. Our descent was more of a catalogue of slips trips and falls much to our accompanying guides amusement. Soaking wet, bruised and broken we reached the settlement of Zenag, which marked the end of our third leg in PNG. Step by step we are making our way across this truly awesome country. It is hard, and some days we question our resolve and motivation. Looking down on the magnificent Watut valley from the top of an unexplored mountain helps on days like those.

Thanks for the support, we are both touched beyond words at the generosity shown to our challenge so far. We will endeavor to update you all again soon. So as always thanks, take care, and get yourselves on the Virgin Giving and #Chuckusafiver!!!